**This does require freezing time so plan accordingly.**

In the spirit of the 4th and this ridiculous heat wave we’re having, I figured, what a better way to celebrate then with these yummy red, white, and blue balsamic cherry pops.  And don’t worry, the way the balsamic cooks down with the cherries and honey doesn’t make it bitter at all, it adds this delicious little tang to these delish frozen treats!

This is actually a pretty simple recipe too, it only has five ingredients, and the hardest part is de-pitting the cherries.  Once you simmer these on the stove it’s pretty much mixing everything with yogurt and layering.  The nice part is also that the yogurt mixtures are pretty thick, so you don’t have to freeze each layer individually.  You layer all at the same time and then freeze away.  It also provides this beautiful swirl effect as the red of the cherries bleeds into the yogurt honey layer a bit.   They’re quite lovely and sure to impress!

A great tip too is these are great with popsicle molds but if you don’t have popsicle molds, you can also use paper dixie cups with popsicle sticks and peel away the paper cup once they’re frozen!  So grab some cherries and yogurt and whip these up for the holiday!  Happy 4th of July to all my USA readers!

**Optional:  Chocolate for dipping or drizzle, just mix 1 T of coconut oil with 1/4 cup chocolate chips and melt in microwave.

De-pit one cup of cherries.  In a medium sauce pan combine cherries, balsamic vinegar, and a 1/4 a cup of the honey.  Cook on high heat stirring constantly until cherries have begun to break down and liquid has been reduced (about 15 minutes).  Set aside and allow to cool for 10 minutes. Mix in 1 cup of Greek yogurt, stir until well combined.  Divide mixture up evenly between popsicle molds.  **Tip: To make it easier to fill molds, use a ziplock bag, fill with yogurt mixture, and cut off the tip (big enough to let cherries through) and pipe in each popsicle mold!

In another bowl, combine remaining 1 cup of Greek yogurt and 1/4 cup of honey until well combined.  Layer on top of cherry mixture.  On top of the yogurt mixture press in a layer of blueberries, making sure they are all touching the yogurt.  To reduce air bubbles, lightly tap down molds on hard surface before placing in freezer.  Freeze until solid (about 6 hours).  A tip to get these out easily, if using a mold, is to place mold under warm water for a second or two.  Popsicle should slide out of mold easily!  If making chocolate drizzle, mix coconut oil and chocolate chips in microwave, stirring every 30 minutes until melted, and dip or drizzle on popsicles. Immediately serve and enjoy! 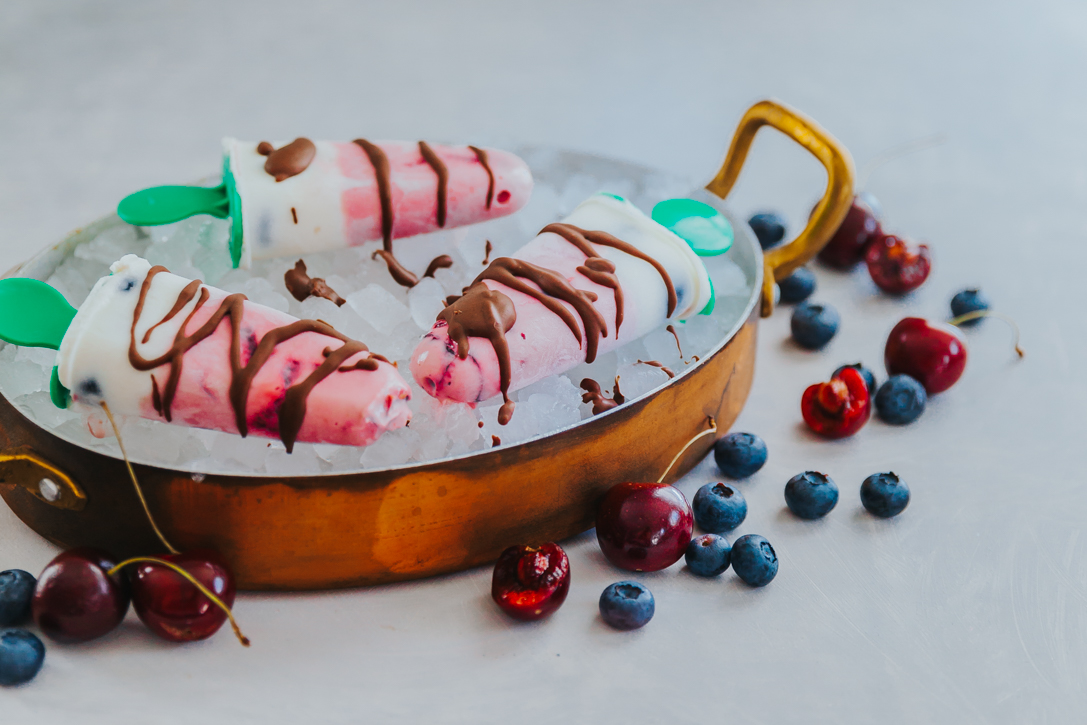