Yes, you heard that correctly, green chile and pepperoni stuffed crust pizza!!  Is your mouth watering, because mine sure was the first time I was exposed to this magical combination in Albuquerque, NM.  So much so, that I bought a pizza pan just to make this lol!  The timing couldn’t have been any more perfect either, because my sister was up this week visiting from Albuquerque and she’s the one who introduced me to this pizza!  So we spent some sister time together, talking about life, binging on Sherlock, and making this dish.  She even hand modeled for me through most of this!

Now this recipe is a recipe of love.  You have to have some patience to make this.  The dough is made from scratch and has this lovely sweetness that makes it taste like homemade pretzels.  You have to let this rise for an hour or two and do some kneading.   It sounds like a lot, but trust me, it’s worth it.  And the best thing about this dough is it’s super duper versatile, and if you want to make a huge batch of it, the dough freezes really well and can be pulled out and defrosted whenever you want to make pizza!  And hey, if this doesn’t seem like you’re cup of tea with toppings, you can easily make this your own and top and stuff this with your favorite ingredients.  Seriously though, this is one of the best pizza combo I’ve ever had… and I’ve had A LOT of pizza in my lifetime!

Now a tidbit about the green chiles I’m using; they are known as Hatch Green Chiles because they are grown in the Hatch Valley in and around Hatch, New Mexico.  The New Mexico Green Chile Pepper has been described as having a lightly pungent taste similar to an onion, or like garlic with a subtly sweet, spicy, crisp, and smoky taste. Because of the soil properties in that area, it contributes to the unique flavor on the hatch chile.  For the rest of the world, if it’s grown outside of Hatch Valley, you’d know the peppers as the Anaheim pepper, but grown outside of Hatch Valley, they don’t taste exactly the same.  I’m actually so obsessed with these chiles that I buy them in bulk via Amazon (worth it).  I eat them on eggs, top burgers with them, and make killer nachos. But, if you’re not as dedicated as I am, you’re welcome to use the roasted green chile’s you can find in most ethnic sections of the grocery store.  Either way, grab those chiles, and let’s start whipping up this pizza, because once you’ve had this, it’ll be hard to have ‘normal’ pizza again.

Heat water up in microwave until it’s reached 105°-110°.  In a large bowl, combine warm water, yeast, and sugar.  Let sit and let the yeast bloom for about 10 minutes until the mixture becomes foamy on top. Slowly stir in salt, olive oil, and flour.  Mix until dough is formed, then turn mixture out onto a floured surface and begin kneading until dough is smooth (around 3-5 minutes).  Place dough in a well oiled bowl, and spin dough in bowl to make sure the whole dough ball is covered in olive oil.  Place a damp dish towel over bowl and let rise for 1-1.5 hours, until dough doubles in size.  Once this has happened, punch down dough and you can either separate to make two smaller 12-inch pizzas with thin crusts, or one big 18-inch pizza with thicker crust (we did the thicker crust!).

Now you can preheat the oven to 450°. On a floured surface, begin to press out the dough until you form a large circle; you want it to be about 2 inches wider then your pan (to make all the yummy stuffed crust).  To ensure you don’t make holes in the dough when you pick it up, fold the circle of dough in half, then in half again (make sure your surface is floured).  In a large high-rimmed pizza pan, coat with 2-3 tablespoons of oil. You should be able to pick it up easily now and place it in pan, lining up circle edges. Now unfold dough carefully to fill the whole pan. Make sure it fills into the outer circumference of the pan.  Take about 1.5-2 cups of the mozzarella cheese and place along the edge of the dough in the pizza pan, top with 1/2 of the green chiles.  Next fold over the extra 1-2 inches of dough over the cheese/chile combo to form your stuffed crust.  The goal is to kind of ‘scoop’ the cheese mixture with the top of the dough and press it under the bottom of the dough. Next place all the sauce on the ‘non-crust’ dough and spread evenly.  Make sure to get it up to the crust as the crust will puff up and cook over this and get that yummy sauce under it.  Next top with leftover 1/2 of cheese, chopped up pepperoni and leftover 1/2 of green chiles. Evenly sprinkle 1/2 of oregano and garlic powder on pizza. Last but not least, mix together garlic salt, 1/2 of oregano, parmesan, and 2 T of olive oil and brush on the top of the stuffed crust.  Place in oven on middle rack and bake for about 15-20 minutes, until crust and cheese is golden brown.  Remove from oven and let cool 10 minutes before cutting into it (I know, it’s hard!). Cut and enjoy!

**This is a harder recipe so I tried to be very in depth with the step by step photos! 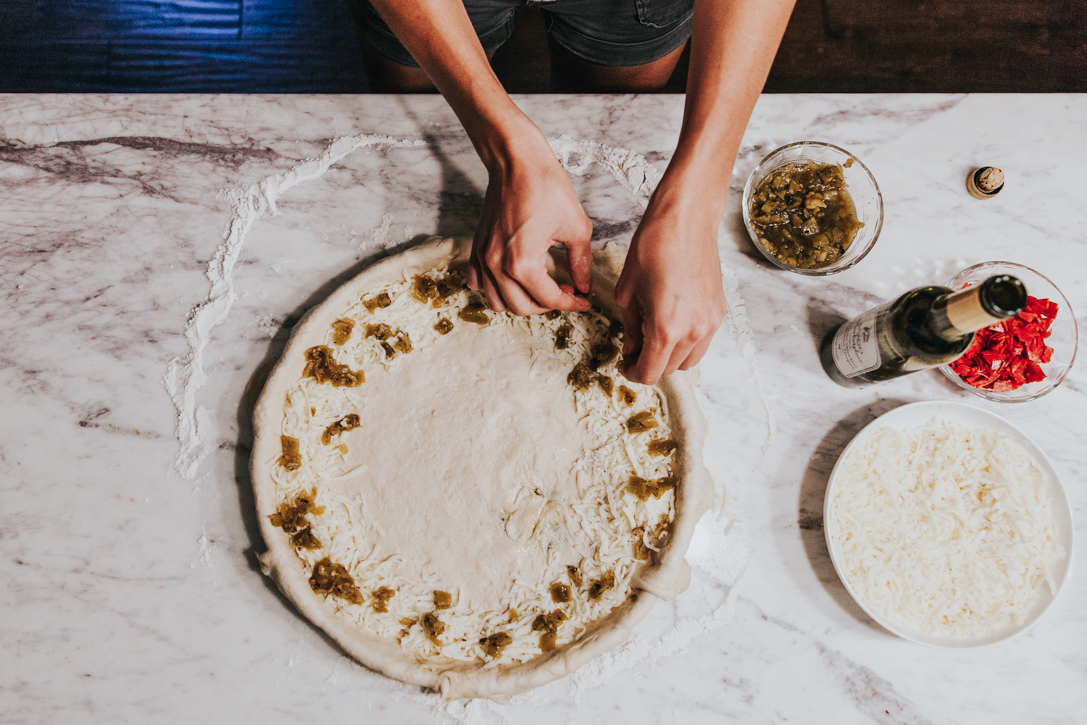 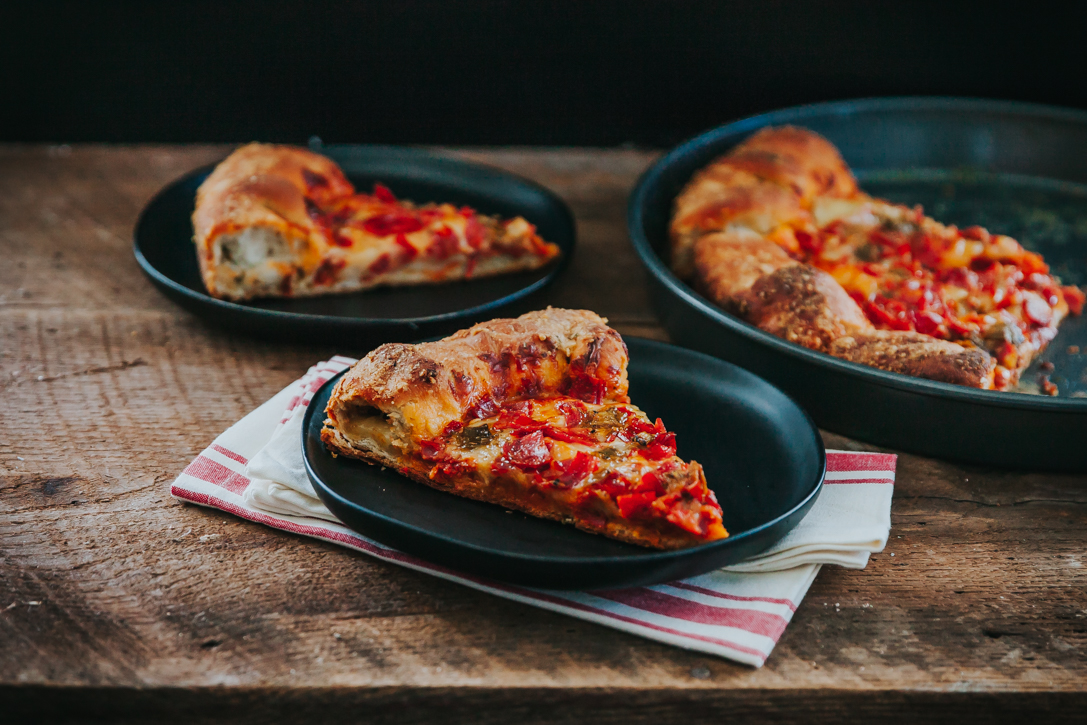 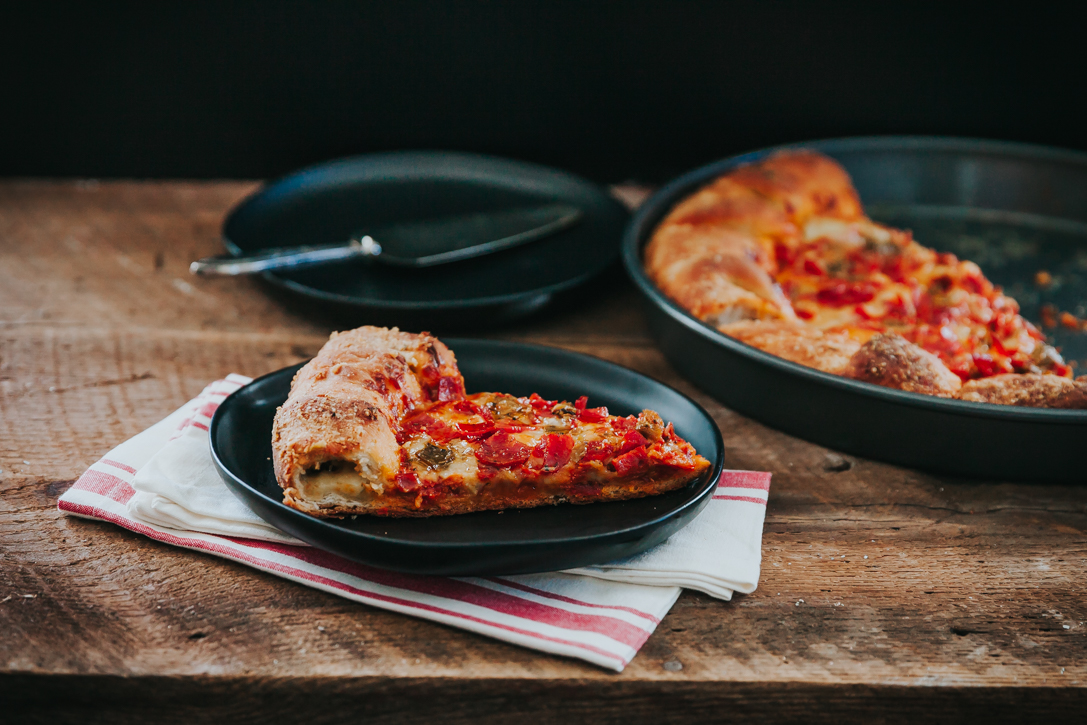